Wealthy New Yorkers regret leaving the city? What a surprise

As the city reopens, those who fled to the burbs fear they were too hasty. Will those who stayed greet them with open arms? 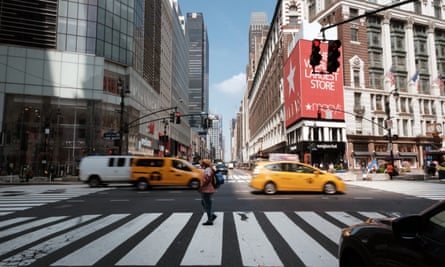 The pandemic has been hard on everyone, but it has been particularly difficult for wealthy New Yorkers. Like when they had to leave the city in droves, after the pandemic hit and they shortly realized the catastrophic setbacks in quality of life they would have to endure (like when Whole Foods started closing two hours early).

'Sue if you must': Lincoln Project rejects threat over Kushner and Ivanka billboards
Read more

Restaurant doors were shut. All the apartments with spare Peloton rooms were gone. “This was a Covid situation,” said property developer Joe Farrell back in April, explaining the actions of a tenant who fled the city for a $2m spot with 10 bedrooms and 15 bathrooms in Long Island. I don’t mean to sound frivolous – the impact of the pandemic has been felt harshly all over the US, including in New York. My pity, like toilet paper, is currently experiencing a drastic shortage, especially with rising unemployment and evictions for average New Yorkers.

Off the wealthy went, into the suburban sunset, promising to never return to the city that died. So long, Big Apple. Hello apple-picking in Vermont. Only now they want to come back: New Yorkers who left have been plotting to return to the city for months, having admitted that leaving was the worst decision of their lives. Poor souls! Confused? Let us break it down for you.

So the wealthy New Yorkers who left want to come back now? Well, sort of. Having left during the difficult moments of 2020, such as the filling in of the census (which meant potentially millions in funding lost for the city), and those ghastly protests over racism – they’re returning just in time to see the Met reopening.

Why did they leave in the first place? Haven’t you been reading the news? New York is dead. It’s practically a ghost town. Season tickets to the ballet at Lincoln Center are totally useless! Plus, why pay rent on one place when you can pay on two?

You don’t sound bitter. Who, me? Annoyed? Bothered that the people who came to the city for its grit left it the moment the city lost its sparkle? Not at all. They can move themselves and their children dressed like tiny professional golfers to Westchester. This city is overpopulated anyway.

So where else did they go? Cottages in Connecticut. Airbnbs on the Atlantic. And to the Hamptons, of course.

And they are returning because … Perhaps all that salmon, steak and rare wine they started hoarding at the beginning of the pandemic ran out, and they needed to come back for supplies. Maybe the farm life wasn’t all they’d imagined. Remember the Great Oat Milk Shortage of 2018? In the countryside, it’s just like that all the time.

And all that fear-mongering about the city dying without their tax money. Look, New York. They want you back. They thought they could make it without you but it looks like they were wrong. Outside of New York, Broadway is just the name of a large, open street.

So you’ll be there to greet them with open arms, I suppose? Didn’t I tell you I’m not bitter?

• This article was amended on 10 November 2020 to correct details related to Joe Farrell’s Long Island property.