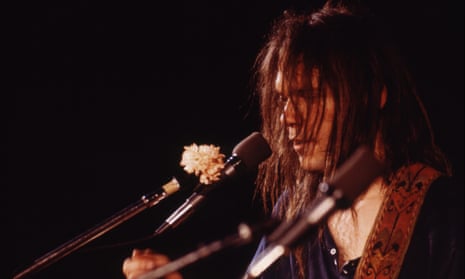 If you’re fresh to the news that the second instalment in Neil Young’s epochal archive striptease is finally upon us, it’s already too late. The 3,000 copies of this £210 box set – 10 CDs, some not-even-bootlegged rarities, all originally slated for reveal in 2014 – have already found homes in homes other than yours.

Young has said another run will follow, due to ship in March. But like its predecessor, Archives Vol I: 1963-1972, released 11 long years ago, Archives Vol II: 1972-1976 will be available to stream on this maverick artist’s own subscription channel, Neil Young Archives.

Drilling down into these chronologically themed outtakes and ephemeral sweetmeats is made marginally easier by the fact that three of the box’s constituent discs are already in the public domain. The mostly live Tuscaloosa was released in 2019, preceded by Roxy: Tonight’s the Night Live (2018) and followed by this June’s Homegrown, a studio album recorded between 1974 and 1975 and so candid that it was sat on for an entire lifetime. The final disc splices together two sets of live performances from 1976 from Tokyo’s Budokan and London’s Hammersmith Odeon; both have been heavily bootlegged, if never officially sanctioned.

Those seeking Young’s live jams, guitar duels, onstage banter and moist communion could do worse than start at the end. If the 131-song tracklisting begins quietly, with a guitar and vocals studio cut, Letter from ’Nam, it climaxes with Young’s most amped history lesson, Cortez the Killer – seven-plus minutes in which he lays into the European destruction of a peaceful native American society, which may be a feat that’s secondary to the edifice of electric guitar Young himself builds along the way.

On the remaining discs, several songs will sound familiar enough, because this is the Neil Young that his most ardent followers think of when they conjure up the Canadian guitarist. Here is the superstar created by After the Gold Rush and Harvest, growing dismissive of fame, trying to chart a course that could encompass myriad approaches and moods. The grunge era did much to seed a new generation with admiration for Young, and this is a Neil Young who Kurt Cobain could really relate to. “I need a crowd of people, but I can’t face them day to day,” Young confesses on a particularly atmospheric unreleased live mix of On the Beach on Disc 6.

Discs 1 (1972-73) and 6 (1974) are the most replete with unreleased material, but rarities crop up regularly. Often, in this vast slew of songs, it’s the strangest that stand out.Fellow Canadian Joni Mitchell makes two surprise appearances, first as the subject of a ditty called Sweet Joni on Disc 1, and, more memorably, cutting loose with a shambolic Crazy Horse on Disc 3 on her own song, Raised on Robbery.

The existence of a Young song called Goodbye Christians on the Shore was rumoured, but it remained unheard until now: a weirdly magnificent tune in 7/8 time whose far-eyed mysticism belies its donkey gait. A few more CDs in, a lovely version of the traditional Greensleeves arrives. Its role in Young’s vast canon? The ballad’s use of the phrase “heart of gold” is certainly a starting point.

Throughout these recordings, the increasingly troubled troubadour is reeling from the toll that heroin has taken on musicians. He’s taking up once again with his most constant backing outfit Crazy Horse in the wake of the death of guitarist Danny Whitten, for whose death Young blamed himself. Although other musicians feature regularly, Young is most often locking guitars here with Whitten’s replacement, Frank “Poncho” Sampedro, who becomes pivotal to the Young mythos. Autobiography is highest in the mix, though, because Young is also in turmoil over his crumbling relationship with Carrie Snodgress, the mother of his child, Zeke, and half in, half out of the fractious Crosby, Stills, Nash and Young – laying down his bleakest work, but having some rollicking musical adventures regardless.

If Disc 1 has more room for unreleased fun – a terrifically roiling live take on the sprawling Last Trip to Tulsa, a standout from Young’s self-titled debut album - Disc 6 doubles down on introspection. It’s home to Frozen Man, a previously unreleased portrait of the artist as an itinerant musician visiting Amsterdam in winter and pondering his inner void. Contrast comes from Hawaiian Sunrise, whose balmy hotel bar vibe almost disguises Young’s inner tussle: between his love and his art.

Here, too, are no fewer than three takes on one song - Love/Art Blues, a deceptively breezy lope in which the hard-touring musician weighs up the perennial difficulties in maintaining a healthy love life. “My songs are all so long and my words are all so sad,” Young muses with no little wryness, alternating with harmonica and yodelling. It’s a phrase that could easily double as this collection’s subtitle.