‘He made a connection’: how did Trump manage to boost his support among rural Americans? 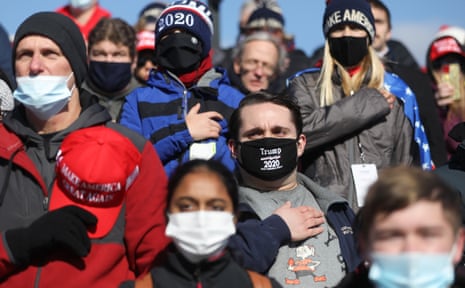 Despite overall defeat, Trump boosted his support in the Iowa heartland and some say sounded the death knell for the ‘country club Republican’ party there

“I was worried. We were in the midst of Covid and the economy wasn’t doing so good and Trump wasn’t handling the Covid interviews very well, and I was thinking this is gonna be a bloodbath,” said the farmer and chair of a county Republican party in the north-east of the state.

But on election day, rural Iowa turned out in force for Trump. He not only beat Joe Biden decisively in a state that opinion polls consistently predicted would be close, but the president significantly increased his vote in counties that put Barack Obama into the White House and which then flipped to Trump.

Howard county, where Shaffer lives, swung from Obama to Trump by a massive 42 points in 2016, the largest shift in the nation. This year, support for the president increased by another seven points to the horror of Democrats who hoped to reduce Trump’s share of the vote even if they did not expect to take back Howard.

In 2008, Obama won half of Iowa’s 99 counties. Two weeks ago, Biden took just six. That was a pattern repeated across midwestern farmlands as Trump solidified support in America’s rural heartland, deepening a divide with the region’s cities that delivered victory to Biden in key swing states.

“Out here, I think 2016 was less a vote for Trump than a vote against Hillary,” said Shaffer. “A lot of people were not sold on her and so they were willing to roll the dice on Trump. Now they are Trump people. They believe in him. They came out in force.”
Shaffer said Trump commands a loyalty among a core of rural voters that he has not seen for a president before, and that it isn’t going away even when he leaves office.

“I do believe this Trump moment is long. He’s changed politics. It’s kind of like Ronald Reagan but this has become more of a movement. Nobody was hanging Reagan flags,” he said.

Shaffer had thought the election would turn into a referendum of Trump’s handling of coronavirus, and that the verdict would not be good after the president’s disastrous daily televised briefings in which he contradicted his own scientists. But Trump increasingly won over voters in the heartland as he cast his objections to the wearing of masks and the closing of businesses to enforce social distancing as matters of personal independence and economic survival.

At about the same time, an unusually large wave of sympathy for George Floyd after he was killed by a Minneapolis police officer in May gave way to alarm in parts of the country at sometimes violent protests in cities such as Portland, Oregon, and rising demands to “defund the police”.

“The George Floyd protests had support from people,” said Cedrick Schlecht, a mechanic and Trump voter who counts himself among those who initially backed Black Lives Matter demands for police accountability.

“They had a lot of support behind them for reform but then they started torching buildings and looting, and talking about defunding, and that all went away. Reform the police would have been a better choice of words because people around here thought defund meant eliminating the police, and that was too far to the left for people.”

Leading Democrats denounced the violence but hedged on wider issues of police reform which, seen from rural Iowa, gave weight to Republican claims that radicals would wield power in a Biden presidency.

But long before that Trump solidified at least some of his support after an outpouring of anger from some liberals who blamed Clinton’s loss on prejudiced white voters in rural America.

“People felt slighted by them calling us racist hicks and talking about the backwards midwest out in the sticks,” said Schlecht.

Shaffer said that played a part in driving more voters to the president this year.
“It was a huge insult to say that you support Trump because you’re racist. A lot of them here voted for Obama,” he said. “The Democrats see us as uneducated, simple thinkers who’ve got guns. It’s a huge boon for the Republican party of Iowa.”

Yet it is clear that some Trump voters are racist, and that other supporters set aside the president’s own racially motivated divisiveness and belligerence even though they claim to dislike it.

“I know he says those things and it’s wrong,” said a businesswoman who twice voted for Obama and then took a chance on Trump because she thought he would be good for the economy. “I wish he would stop tweeting. But it’s not enough to stop me voting for him again. If anything, I feel more alienated from the Democrats over the past year. They’ve gone off the reservation. I don’t recognise them any more.”

Trump, on the other hand, has successfully portrayed himself to many midwestern voters as listening to their concerns and acting on them.

“This is probably the most agricultural-friendly president I’ve seen in many years,” said Shaffer, a farmer himself as well as working in river conservation. “This was the first time a president actually went to battle on trade instead of just talking about it.”
Trump lavished grants on farmers he said were paid for from tariffs on Chinese imports.

“The money from these tariffs on China went into farmers’ pockets. Our small farm, we have 145 acres of cropland, had $18,000 of this China money,” he said. “Very few farmers that I know of were Biden supporters.”

Trump also benefited from a wider confidence in his handling of the economy, alongside tax cuts, which underpinned a belief in parts of rural America that he would be the best president to oversee the recovery after coronavirus.

“One thing that helped him was the economy before coronavirus was really strong,” said Schlecht. “Economies are like trains, it takes a while to slow down. Once they’re stopped, it takes forever to get going again. People are afraid Biden is going to stop the economy because of coronavirus.”

For all that, Trump still lost the election.

Schlecht, who is less enthusiastic about the president than he was four years ago but voted for him again because as a hunter he fears Biden will restrict gun ownership, said while he generates passionate support among some voters he alienates too many others.

“Trump’s kind of an ass, pretty plainly. He’s an abrasive personality. He had his base but he could have expanded more towards pulling a few other people in to get more votes and he wasn’t interested in that at all. He liked making people mad,” he said.

Shaffer also thinks Trump only has himself to blame for losing.

“I think one of the biggest reasons Trump lost was that first debate. It was so awful even my diehard Republican friends were mortified by it. If he loses, he has no one else to blame. It was his to lose,” he said.

‘That mentality is going to stick around’

Shaffer still questions the election results although he is not firmly convinced they were rigged as the president claims.

But Schlecht has no doubt Trump lost.

'I’m more for Trump than I was before': president clings to narrow lead in Iowa as Biden closes in
Read more

“I think it’s pretty well legit. There probably could have been a few thousand problem votes here and there, provisional ballots or ones that were postmarked late. But on the whole, I don’t think that’s enough to make up the difference,” he said.

Even with Trump gone, Schlecht reckons that his legacy in rural America will be enduring.

“I think that type of mentality is gonna stick around for a while. Trump made a connection here,” he said.

Shaffer said the consequence will be an end to what he called the country club Republican presidential candidate and a shift in the party’s politics in his region.

“We are not the party of the the country club any more. That was what Romney and George Bush Sr, and even George Jr. Now you’re going to have a more populist Republican party which is good because obviously it’s easier for a populist Republican to win in Iowa than it is an elitist,” he said.