More than a second gentleman: why Doug Emhoff is Kamala Harris’ secret weapon

I’m not obsessed with Doug, but he could probably be my pub quiz subject 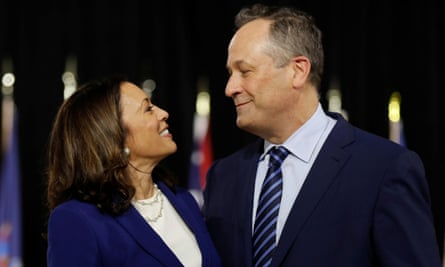 There is much to say about Joe Biden and Kamala Harris’s historic win, but I’d like to focus on a man called Doug. Doug Emhoff is a lawyer and – more relevantly to your interests and mine – Harris’s husband, and unless you are part of the #DougHive, Doug’s devoted (and, one suspects, mainly female) fans, it’s likely you don’t know much about him.

This in itself is astonishing, given that women are generally discussed through the prism of their personal lives. I didn’t realise until last month that the young adults with whom Harris is occasionally photographed are not, as I’d assumed, her children, but rather Doug’s children and her stepchildren. Having children, or not, once defined a woman’s public image, as Theresa May could tell you, but I don’t recall a single discussion of Harris’s parental status during this campaign. Before we all celebrate this too ecstatically, Harris remains an anomaly; just try to find a single article about Amy Coney Barrett that doesn’t mention how many kids she has, and then imply that this has some bearing on her fitness for the supreme court. That Harris has largely swerved this is mainly down to her, but also down to Doug. (I know newspaper style dictates I should refer to him as Emhoff, but, really, he is such a Doug.)

I am not obsessed with Doug; he is not my Mastermind subject. But he could be my pub quiz subject. I know how he and Harris met (he told a mutual friend he fancied her) and how he dances (terribly, as various YouTube clips prove). I love that they got together in their late 40s, and I love that when a protester crashed a talk Harris was giving last year, Doug furiously strong-armed him off the stage. “Thx for all the kind notes. We are good. I love @kamalaharris and would do anything for her,” he tweeted the next day.

The media line on them is that he is the adoring husband and she is the fearsomely impressive woman in front. (Hillary Clinton should have been accorded the same respect, but unfortunately arrived on the national stage as a Doug – ie, as the appendage to the main event – and never really escaped that yoke.) The general excitement about Harris’s political triumph has been tempered with concerns about her history of avoiding intervention in cases involving killings by the police. But Doug is someone we can all enjoy in an unqualified way, as he introduces the appeal of the dorky, uxorious Jewish husband to the mainstream.

Doug has now quit his job to be the United States’ very first second gentleman, and while Harris is rightly celebrated as the first female, African American and Indian American vice-president, there has been much Jewish excitement (from me) that a Jew is now in the White House, just as the anti-Semites always feared. And so we will assume our long-planned world domination through the second gentleman, as predicted by the rabbis.

Of course, a large part of the fascination with a politician’s spouse is the slightly retrograde idea that they reveal something about the politician. I’ve already forgotten everything about Mike Pence’s wife, including her name – other than that her husband wouldn’t eat lunch alone with a woman who wasn’t her and (worse, in my book) the rumour that he calls her “mother”. The public’s parsing of Melania Trump for misery, and the rumours that she had been replaced by a body double, reflected a collective longing for proof of her husband’s wickedness. But I always found Melania’s own behaviour sufficiently awful – from propagating the birther theory, to that “I really don’t care. Do u?” jacket on a visit to migrant children – to not require any reading of runes.

Without Hillary, Bill Clinton would merely have been a sexually incontinent hound dog; that he got her – this brilliant, serious feminist – and that she stuck with him, cast an interesting multilayered light on them both. In her new book, Rodham, the poet laureate of political spouses, Curtis Sittenfeld, plausibly imagines (semi-spoiler) Bill’s 1992 presidential candidacy failing because he wasn’t married to Hillary. In my favourite book written this century, 2008’s American Wife, Sittenfeld fictionalises Laura Bush’s life, looking at how this bookish woman got together with a crass fratboy. Despite his friendship with Michelle Obama (the ultimate political spouse), I have remained resistant to George W Bush’s alleged charms; but since reading American Wife, even I have come to appreciate his obvious love for Laura.

Doug is not the first male political spouse, and yet it is – still – thrilling to see a man put a pause on his own ambitions for those of his wife. (It’s a damn shame that we’ll never see how Bill Clinton would have handled being the first man.) But that a man taking the back seat still feels remarkable says less about the spouses and more about us: how rigid marital moulds are, and how hard it is to break them.

In every possible way, Harris and Doug, like Biden and Dr Jill Biden (who worked as a teacher when her husband was VP, and has indicated that she plans to continue doing so), are the palate-cleansing opposites of the Trumps and Mike and Mother Pence: they are equals, and they clearly have fun together. A political leader’s relationship with their partner reflects and also sets a national mood, from the Kennedys’ broken illusion of perfection in 60s America, to the Blairs’ bolshie self-confidence in late 90s Britain. With Harris’s marriage, we see a softening of gender roles, and a couple who married, not for children or social expectations, but because they just really dig each other. Bring on the era of Doug.