Boris Johnson under pressure as scientists back tight rules for Christmas 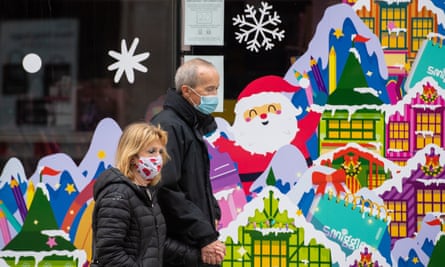 Boris Johnson will meet his cabinet remotely on Sunday to decide how people will be able to gather with loved ones at Christmas, before the announcement of a new Covid winter plan.

The prime minister, who is self-isolating, will then confirm by video to parliament on Monday that national restrictions will end on 2 December and be replaced by the three-tier regional system, with even tighter controls in some areas.

The Observer understands that ministers are keen to agree a set of UK-wide rules that can be adopted for the Christmas period in England, Wales, Scotland and Northern Ireland. Talks with the devolved administrations were also taking place this weekend to try to agree a united approach that will apply for a limited period during the festive season.

Also on Monday the government’s key scientific committee, Sage, is expected to publish further papers setting out its advice that the previous tiers were not strong enough, and that a tougher regional approach is now required.

Downing Street said on Saturday night that “while measures will be similar to those in place previously, the tiers will also be strengthened in some areas in order to safeguard the gains made during the period of national restrictions”.

It is expected that more areas will be placed into the higher tiers in order to keep the virus under control, and ensure further national restrictions are not required.

The new Covid winter plan is being thrashed out amid greater confidence about the use of vaccines and mass testing, and a growing feeling that restrictions can be relaxed substantially by spring. Johnson believes that, provided vaccines are approved by regulators, the first injections can be made next month before being rolled out more widely in the new year.

On Thursday, ministers will announce which areas will be placed into which tiers, based on the latest data. MPs will be able to vote on the tiering system before it comes into force.

No 10 said: “Everyone’s efforts during the current national restrictions have helped bring the virus back under control, slowed its spread and eased pressures on the NHS.

“But the prime minister and his scientific advisers are clear the virus is still present – and without regional restrictions it could quickly run out of control again before vaccines and mass testing have had an effect. That would put in jeopardy the progress the country has made, and once again risk intolerable pressure on the NHS.”

Johnson is, however, still facing competing pressures from, on the one hand, Tory MPs concerned about the severity of a revamped tier system and, on the other, scientists who are increasingly warning that easing the rules over Christmas could lead to a devastating increase in cases.

Last night it emerged that the PM faces a rebellion from Tory MPs over another period under a tiered system that could leave him relying on Labour’s support to pass it through the Commons. It is understood 70 Tory MPs have signed a letter warning that they cannot support localised restrictions next month unless ministers can demonstrate they “will save more lives than they cost”.

The group, led by former chief whip Mark Harper and former Brexit minister Steve Baker, is demanding to see a full cost-benefit analysis of the restrictions.

“We are especially concerned about outside sport, the 10pm curfew, closure of non-essential retail, gyms and personal care businesses, restrictions on worship, care home visits, hospitality and the inclusion of children under 12 in the rule of 6,” they write. “In these areas, we need to be assured of the evidence of their effectiveness.”

Meanwhile, scientists and health experts added their voices to those worried about plans to create a short window in which restrictions could be eased over the Christmas period. Such a move, they argue, could lead to large increases in Covid cases and cause thousands of unnecessary deaths.

Scientists point out that vaccines could be distributed to the public in a few weeks. “We just need to be patient for a little bit longer,” said vaccine expert Prof Brendan Wren of the London School of Hygiene & Tropical Medicine. “A vaccine is just round the corner. We will just have to accept this is going to be a different Christmas and keep the pubs shut until we know we are safe.”

Those opposed to the easing of lockdown also point out that other major religious festivals and public celebrations have been scaled down because of Covid-19. “There are precedents from all around the world,” said Dr Michael Head, senior research fellow in global health at Southampton University.

“Chinese new year was curtailed when the outbreak emerged in January. The Hajj usually attracts over 2 million pilgrims into Saudi Arabia but this year was restricted to just 10,000 visitors aged between 20 and 50. These measures prevented an estimated 127,000 new cases.” Britain needed to act with similar restraint, he added.

Scientists also said the “eat out to help out” scheme – to help the hospitality industry – had shown the dangers of encouraging people to dine out and gather during a respiratory disease pandemic.

“It was a disaster,” said Wren. “It undid months of hard work that had brought case numbers down during the first lockdown. We encouraged people to go inside and mingle during summer when they should have stayed outdoors for as much as possible. Now they want to repeat that. They shouldn’t.”

In addition to the eat out scheme, several scientists told the Observer that the government’s tier system for tackling the disease in England had been badly flawed. “Essentially, tier 1 did not work. It was too slack and allowed cases to continue to rise in places where it was imposed,” said Prof Paul Hunter of the University of East Anglia. “After 2 December, when lockdown ends, we need to return either to tier 2 or tier 3 across the country.”

However, scientists also said they recognised the serious social and emotional risks that faced the public over Christmas. These would also have to tackled. “If we can keep homes as well-ventilated and protect granny and grandad as much as possible, then some sort of limited Christmas may be possible,” said virologist Dr Julian Tang, of the University of Leicester.

Head agreed. “It may be that a restricted bubble could work, with for example two households mixing. However, even this level of restriction will still pose some risk and we would see higher numbers of cases in January as a result.”

Attempts to return to a normal Christmas were also dismissed by Tang. “Very starkly, the virus will inevitably spread over Christmas if there are more frequent contacts, within multigenerational family gatherings, from different households, from different parts of the country, for longer durations, in crowded home environments,” he said.

The answer was to impose stricter restrictions in December, said Hunter. “We need to impose tier 2 or 3 restrictions after 2 December but maybe allow a couple of days of relaxation between Christmas Eve and Boxing Day. If you don’t, then a lot of people are just going to break the law and I think once they’ve done it once, they will be tempted to do it again and again.”