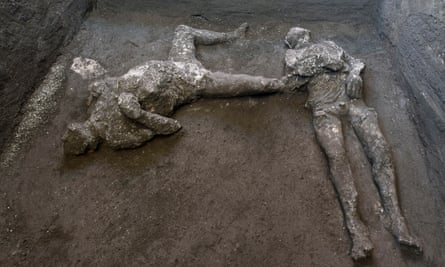 The almost perfectly preserved remains of two men have been unearthed in an extraordinary discovery in the ancient Roman city of Pompeii.

The bodies of what are thought to be a wealthy man and his slave, believed to have died as they were fleeing the catastrophic eruption of Mount Vesuvius in AD79, were found during excavations at a villa in the outskirts of the city, Pompeii archaeological park officials said yesterday.

Massimo Osanna, the park’s director, said the find was “truly exceptional”, while culture minister Dario Franceschini said it underlined the importance of Pompeii as a place for study and research.

The two men, lying close together, are believed to have escaped the initial phase of the eruption when the city was blanketed in volcanic ash and pumice, only to then be killed by a blast that happened the following day.

Their remains, for which casts have been created, were discovered in the same location where a stable containing the remains of three harnessed horses were unearthed in 2017.

Experts said the younger man, who was probably aged between 18 and 25, had several compressed vertebrae, which led them to believe that he was a manual labourer or slave. He is thought to have been wearing a pleated tunic, possibly made of wool.

The elder man, aged between 30 and 40, had a stronger bone structure, particularly around his chest area, and was also wearing a tunic. They were found lying in what would have been the corridor of the villa.

Park officials said that further digging over the coming months might reveal where the men were heading and determine the roles they played in the elegant villa.

It is the latest in a series of fascinating discoveries that excavations at Pompeii have yielded in recent years.

The bodies of two women and three children were discovered huddled together in the room of a villa in the Regio V area in October 2018. A week before, the same villa revealed a charcoal inscription that suggested Vesuvius erupted in October AD79, and not in August of that year as previously thought.

The remains of a man, who was also believed to have survived the first part of the explosion, were found in May 2018. His legs and torso were protruding from a large stone block but, rather than being decapitated by it, archaeologists believe he was killed by the lethal gases of the eruption’s later stages. The victim, believed to have been in his mid-30s, was also found with a small sack of 20 silver and two bronze coins, the equivalent of about €500 in today’s money.

The latest dig, part of a €1m project, is continuing despite the coronavirus pandemic. The park, which is currently closed to tourists, usually attracts four million people a year.

The Pompeii ruins were discovered in the 16th century, with the first excavations beginning in 1748. Over 1,500 of the estimated 2,000 victims have been found over the centuries.