Refugees
This article is more than 1 month old

This article is more than 1 month old 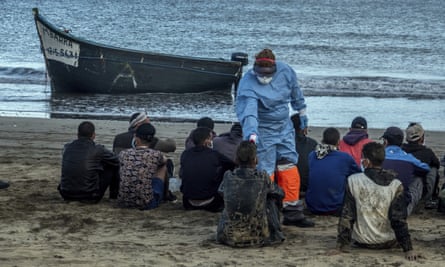 UN refugee and migration agencies have called for renewed efforts to tackle people-smuggling and trafficking gangs, and to protect those they exploit, after at least 140 people died off the coast of Senegal in the deadliest shipwreck recorded this year.

The deaths, which followed four shipwrecks in the central Mediterranean last week and another in the Channel, come amid a huge rise in the number of migrants and refugees using the dangerous Atlantic route from Africa to the Canary Islands.

According to the International Organisation for Migration (IOM), a vessel carrying 200 people left the Senegalese coastal town of Mbour last Saturday, bound for the Canary Islands.

A few hours into the journey, the boat caught fire and capsized near Saint-Louis on Senegal’s north-west coast. Fifty-nine people were rescued by nearby fishing vessels and the Senegalese and Spanish navies, and the bodies of 20 others were recovered.

A survivor of the wreck said it had been impossible to count the number of passengers on the boat, a narrow craft called a pirogue more usually used for fishing. Many were from Saint-Louis, where entire streets were plunged into mourning by the tragedy.

Rescued by Spanish coastguards before being handed over to Senegalese authorities, the 20-year-old told local media that “when it blew up, it was everyone for themselves to escape and survive”. He described catching hold of a plastic jerry can, throwing it into the water and then diving in after it.

“It was a fight for the jerry cans,” he said. “I spent three hours hanging on to it. When the boat exploded I saw people, possibly dead, either side of me, but I was only thinking about saving myself.”

The incident on Saturday was followed by another early on Monday in which a Senegalese navy vessel struck a boat filled with migrants when it tried to escape a patrol. Authorities said they were able to save “only 39” people. More are presumed to have drowned.

The UN refugee agency, UNHCR, said the Atlantic route was growing in popularity once again because of enduring conflicts, land border closures due to coronavirus and increased controls in some north African countries.

“This is a trend that’s going to continue – especially given the current context,” said María Jesús Vega, a spokeswoman for UNHCR Spain. “We need to do a lot more to fight these merciless mafias, who are already reorganising themselves to play with people’s lives.”

Even before reaching an overcrowded boat, said Vega, many people were tortured and abused by the gangs. “Then there’s the crossing itself, which is very long and dangerous and which can take days or even weeks. This is the deadliest route. Some of these boats are fully packed with people – 100, 200 per boat – so people are really risking their lives all over again.”

Vega said that unlike the crisis in 2006, when about 32,000 people arrived in the Canaries, NGOs were seeing “mixed flows”, with more refugees braving the Atlantic route along with migrants.

Interviews with 130 men and women in August revealed that many were fleeing conflict or indiscriminate violence in the Sahel region, while others said their already precarious situation had been worsened by the pandemic.

“The proportions vary, but more than 30% of these people are from Mali. There are also a lot of Moroccans and as well as people from Ivory Coast, Senegal and Guinea,” said Vega. “The majority are men, but 20% are women and 12% are children. There wasn’t a significant number of women in the 2006 crisis.”

Vega said that while the number of arrivals, compounded by the pandemic, was putting the Canaries’ reception infrastructure under huge strain, “a good, coordinated response” was required from the local, regional and central governments. She said interpreters and legal advisers needed to be on hand to identify, help and protect people who may be entitled to asylum and who could be at risk if returned.

“We call for unity between governments, partners and the international community to dismantle trafficking and smuggling networks that take advantage of desperate youth,” he said. “It is also important that we advocate for enhanced legal channels to undermine the traffickers’ business model and prevent loss of life.”

IOM said that in September alone, 14 boats carrying a total of 663 migrants left Senegal for the Canary Islands. More than a quarter of the departures were reported to have experienced an incident or shipwreck.

This week, the Senegalese government said it was also concerned by the number of people trying to reach Europe by sea. “The government has noted with regret the resurgence of clandestine emigration by sea,” it said in a statement, adding that navy patrols had rescued 388 people at sea between 7 and 23 October.

An estimated 414 people have died trying to reach the Canaries so far this year – almost double the 210 deaths recorded in 2019.

In an interview with hlcarpenter.com this week, Spain’s secretary of state for migration said the issue required a coordinated international response.

“It’s clear that everyone realises that we won’t be able to deal with this phenomenon unless we work in countries of origin,” said Hana Jalloul. “But we also need to focus on the mafias who abuse these people and push a dream that ends in death at sea.”